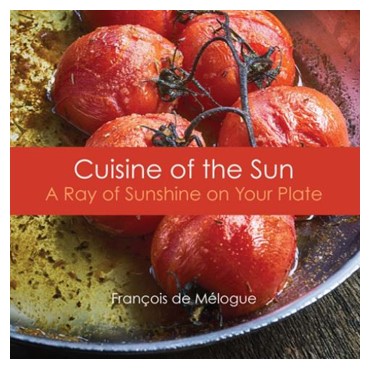 (MediaQuire) As a beloved culinary Renaissance man, Chef François de Mélogue can be described in many esteemed ways: Extraordinary chef, respected culinary historian, adventurer (culinary and otherwise), creative food photographer, articulate writer and blogger about all things culinary, a comedian, a Jimi Hendrix aficionado and now, cookbook author. He has built a loyal following across the country due to the wonderful food he has prepared in some of the nation’s most memorable restaurants.

Chef de Mélogue now celebrates a new milestone in his stellar career: the Kickstarter launch campaign (link goes live at 1 p.m. EDT on Saturday, August 15, 2015) of his first cookbook,Cuisine of the Sun: A Ray of Sunshine on Your Plate. The goal is to release the cookbook in mid-December, in time for holiday gift giving.
Chef François de Mélogue
Growing up I learned to cook at my other’s apron strings. She made a lot of tarte Tatins over the course of my childhood. When I became Chef of a Southern French restaurant in Chicago I decided to honor her Provençal roots with a savory interpretation using the classic flavors of artichokes, fennel, goat cheese and olives. It became a signature dish that followed me throughout my career. You can prep the tart a few hours before eating and then cook at the last minute. Try serving the tart with a simple green salad dressed in a vinaigrette or with roasted beets.

Sauté red pepper, fennel and sweet onion in olive oil till soft and lightly caramelized. Season with sea salt and pepper then reserve artichoke. Trim artichokes using a serrated paring knife till all the outer leaves are removed and there are no more bitter dark green spots. Cut the top off just above the bottom and use a teaspoon to scoop out the choke. Cook in rapidly boiling salted water with olive oil and sliced lemon till a paring knife easily pierces the bottoms, about ten minutes.

Mix chopped olives with egg yolks, black pepper and vinegar. Whisk over boiling water till light and creamy. Combine olive oil and butter then slowly whisk into eggs. This sauce uses the same methods as making a Hollandaise.
Assemble the tart

Drizzle a little olive oil in four small blini pans. Slice artichokes thinly and fan out in the pans. Top with a generous tablespoon of the caramelized vegetables, shaved Parmesan, ½ an ounce of goat cheese then press a circle of puff pastry. The puff pastry should be a slightly larger diameter than the pan you are using. Push the edges firmly around the artichoke. Bake at 450 degrees till golden brown, about 15 to 20 minutes. Flip out onto a warmed plate, top with a spoonful of olive emulsion and enjoy!