Hollis Wilder knows one thing to be true: there are no shortcuts to success.

A two-time champion of Food Network’s Cupcake Wars, Wilder segue’s from the sweet to savory cupcakes in her new book Savory Bites. The book features over 100 recipes that include reinventing family favorites into portion controlled meals such as; Chicken Pot Pies, Risottos with Vegetables, Smoked Salmon Egg Salad.

As with any success story, there’s a beginning. After spending her college years traveling in Europe; “learning about food, flavors and spices,” Wilder launched her cooking career in Hollywood feeding the creative minds of writers and producers of Seinfeld, Will & Grace, Weeds and That 70′s Show, just to name a few.

It was only a matter of destiny when the Food Network executives would call. They did and invited her to participate on the popular TV show Cupcake Wars.  She and the contestants were given cupcake baking challenges every day for several weeks. In one episode, “the judges presented us a platter of all breakfast meats that included salmon, bacon, sausage, cream cheese, lemons, and chives.”

“Working within time constraints, Wilder had what I call “an intuition” and followed her hunch despite the challenge of convincing practical thinking judges, “I knew the judges would have a hard time wrapping their heads’ around a smoked salmon cupcake.” She tells me her cupcake creation consisted of a lemon scented smoked salmon cupcake with a cream cheese, capers and lemon zest and chives. “When you bit into it, you’d have the softness of the cake and the reveal of the salmon which was mixed into the savory cream cheese mixture.”

Wilder’s intuition paid off in more ways than one. Her savory salmon cupcakes made her the winner and she was immediately contacted by Abrams Books who offered her a book deal.

Savory Bites includes familiar flavors and recipes that everybody loves; pizza, casseroles and meat dishes, breakfast quiches. Wilder says, “everybody has a cupcake pan and all the ingredients are easily at hand in our freezers, refrigerator and pantry.”

“The trusty cupcake pan works just as well for satisfying mini meals as it does for decadent sweets. Small, uniform portions make it easier to avoid overeating, and the meals are perfect for making ahead of time and freezing for the week in single or family-size portions.”  Wilder also includes tips for having children help with the cooking to make a more enjoyable family mealtime.

“Every Friday we have a family pizza party,” says Wilder. She and her husband along with their 8 and 9 year old kids gather around the kitchen counter where she has carefully laid out bowls of sauces, meats, cheeses and vegetables. “Everything is chopped up, grated and cooked – ready to go!  We use the small whole wheat pita bread as the wrapper and my kids  add the toppings they like.  They love making their own personal pizzas!”

Wilder has learned that when kids create their own savory cupcakes, they will eat it – vegetables and all!

As for Wilder’s future plans,  “I am working on a product line to manufacture and sell Savory Bites in the freezer section of the grocery stores. Food creation is what inspires me, it’s what makes me get up in the morning to pursue my dreams. It’s never been about where this cookbook would take me, but rather, it was about making the very best food I can make and present; food is love and I making it.” 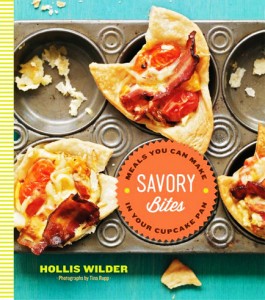 Author:  Victoria lynn Weston is the founder and president of MediaQuire.  She is also an intuitive consultant, writer and producer.  victorialynnweston.com | @mediaquire