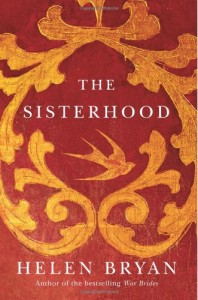 (MediaQuire) Today I’m posting about  Helen Bryan, the bestselling author of War Brides, whose new novel, THE SISTERHOOD (Amazon Publishing; April 30, 2013) is an intricately plotted, historically evocative, atmospheric tale featuring courageous women who use their wits to help other women in the face of overwhelming oppression.

With THE SISTERHOOD, Bryan weaves two stories separated by centuries about the resilience of the female spirit. Set in Spain during the sixteenth century and present-day, Bryan tells the story of Los Golondrinas Convent—a place of refuge for women and girls during the Spanish Inquisition regardless of faith or sin, many of whom had desperate reasons to hide from the church and state authorities.

Each girl and woman’s story was recorded in the Convent’s chronicle to bear witness of the cruelty and inhumanity they suffered. The Chronicle helped bind the sisterhood across generations.

Centuries later, Menina Walker, a 19-year-old adopted daughter of a small-town American couple, finds her life in shambles. A despicable incident causes her to call off her wedding, and she finds herself alone and depressed. Her best friend arranges a trip to Spain for her to get away, and Menina takes with her the only links to her birth family: an ancient book and a medal from the convent from which her parents adopted her.

In the process of unlocking the stories of the Chronicle, she learns that nothing less than destiny brought her to the birthplace of her ancestors, and the power to find peace and love had been burning in her blood all along.

Intrigued I asked Helen Bryan a couple of questions:

What inspired you to write the book?

A visit to an old Spanish convent, many years ago . In the sixteenth century this particular  convent had a special orphanage for the illegitimate daughters of the aristocracy, who were brought up and stayed to become nuns. If I believed in ghosts, I would say there was a sense the long departed nuns and children still hovered  in the corridors, longing to tell their personal stories.

Which character is your favorite and why?

There are so many and I love nearly  all of them!  Among the nuns I suppose it would have to be either the sixteenth century Abbess or the twentieth century Mother Superior. Of the young women, perhaps I would choose Marisol. Then, of course,  indomitable  Salome is in a special class of her own.

What would women learn from this?

With some honorable exceptions, I think mainstream history ignores women and their contributions. With historical fiction, it is possible to redress the balance, to  look at events or a particular time period as they might have looked to women, to consider events in the context of their impact on women’s lives.Though the book is fiction, I hope it will be thought provoking, and that  women readers will see in it a  reflection of themselves and other women they know. 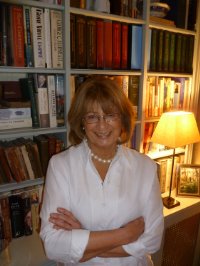 Helen Bryan was born in Virginia, grew up in Tennessee, and graduated from Barnard College. Since 1971 she has lived with her family in London where she qualified as a barrister and is a member of the Inner Temple. She has written a layman’s guide to the English planning system “Planning Applications and Appeals” and a biography “Martha Washington First Lady of Liberty” which was awarded a Citation of Merit by the Colonial Dames of America. Her first novel, the bestselling, “War Brides” is a World War II romantic saga,  inspired by the stories and reminiscences of the wartime generation, especially those of women who joined Churchill’s Special Operations Executive. The Sisterhood is her second novel.