How much do we control our own destiny?

In Lisa N. Edwards’ new book, Can’t Fight Fate, Nikki, a lively Australian girl, thought she had her life planned out—until a visit to a psychic flipped her world on its head. During her reading, the psychic describes Nikki’s soul mate, a Hollywood man with crystal green eyes. But then, she lays down a cryptic warning: “Remember, he’s nice to look at, nice to see, but if you chase him, he will flee…”

Flash forward 17 years, Nikki’s career as a Hollywood Entertainment Lawyer is taking off, and the Green Eyed man is standing in front of her. The words of the psychic are imprinted on her mind… “Remember he’s nice to look at, nice to see, but if you chase him, he will flee…” So if she cannot chase him, and she cannot tell him what she knows. Will she ignore the warnings to get what she wants?

With her best friend, Siobhan, who is effectively her audacious and sassier alter ego, they navigate their way through the supposedly predestined life!

Nikki can try, but she Can’t Fight Fate.

Inspired by her own experiences with psychics, Edwards brings a fresh perspective to romance and finding your soul mate in a chaotic world. Though she had an extremely successful career as owner and Company Director of Melbourne entertainment agency VisionsMCP, she knew she had other dreams to follow and sold the company in 2013.

After she successfully auditioned for and completed NIDA’s (Nation Institute of Dramatic Art),

Edwards traveled between Hollywood and Australia, during which she co-wrote an award-winning screenplay. Her latest acting credits include soon to be released Aussie comedy ‘Now Add Honey’ and two Award Winning Hollywood short films—‘Riviera’ and ‘The Road Less Traveled.’ 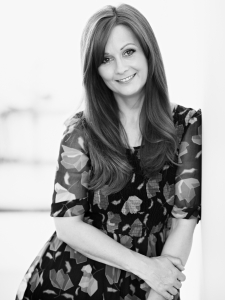 Lisa N. Edwards is a graduate of NIDA (National Institute of Dramatic Art) in Sydney, Australia, after which she was trained at The Film Space. She and her youngest daughter, Darcie, were featured in a series of Coles TV Commercials—‘Feed your Family for $10 with Curtis Stone’ and Coles Home Brand. Lisa’s latest credits include soon-to-be-released Aussie comedy ‘Now Add Honey’ and two Award-Winning Hollywood Short films, ‘Riviera’ and ‘The Road Less Traveled.’ A large portion of Lisa’s working life was spent as a Talent Agent with VisionsMCP in Melbourne, of which she was the owner and Company Director for 13 years.