I Married Dr. Jekyll and Woke Up Mrs. Hyde: or What Happens to Love?

I Married Dr. Jekyll and Woke Up Mrs. Hyde: or What Happens to Love? 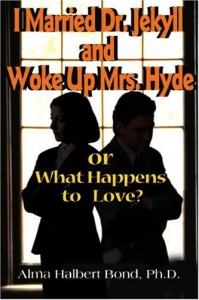 Why is one marriage out of two today doomed to end in divorce? My interviews with 71 divorced women searched for answers. Did they love their husbands when they married? Did they believe at the time that it was ’till death do us part’? Were there other lovers in the lives of the couple at the time of the divorce? Is there any connection between an unhappy childhood and a failed marriage? Do women tend to lose their identities in marriage?

To my surprise, I saw the majority of interviews take on a similar shape, which revealed who the women were and how the divorces fit into the pattern of their lives.In my years of practice as a psychoanalyst, I saw how badly people need others with whom to identify. With this collection, divorcees can see their own fears, despair, grief, hopes, and aspirations reflected in the lives of women passing through similar experiences. I hope the fact that all the subjects came away from their divorces with greater strength, insight, and self-esteem will serve as an inspiration to all survivors of loss and pain. As Queen Isabella said in Henry V, “Happily, a woman’s voice may do some good.” [Buy on Amazon]