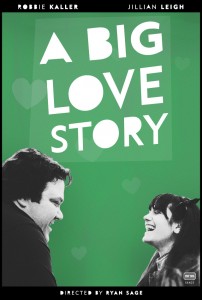 Director Ryan Sage found the script for the award winning feature in a rather unusual place, Craigslist. There he purchased A Big Love Story from Chicago comedian Dale Zawada for $500.  The film tells the story of Sam, a former college football star whose chance to play in the NFL abruptly ends with a blown out knee.

Seven years later, he finds himself alone, working a minimum wage job and weighing a deadly 413lbs. The time has come for some change! The time has come for some weight loss!  Enter Cassie, a personal trainer who not only helps him lose weight but find love. Steering clear of the standard transformation formula seen on many current television shows such as, “Biggest Loser,” Sam finds acceptance – and love – in unexpected places.

Starring Robbie Kaller (White T, Beverlywood) and Jillian Leigh (City Baby, Cigarettes for the Road) as its loveable leads and coupled with its unique background, A Big Love Story has won awards in festivals across the country, including:

Along with its impressive following, A Big Love Story has received attention from major media outlets that had the following to say:

“A pleasing indie romantic comedy…unpretentiously well-turned.” Variety“Fans of such films as Knocked Up or 40 Year Old Virgin would feel right at home with this story, but at the same time there is a subtlety and self respect which comedies of that style often lack.” Rogue Cinema“When a romantic comedy comes along, makes you smile ear to ear, and truly allows you to fall in love with each and every character you meet, it is an absolute revelation. That’s exactly what Ryan Sage’s new film, [A BIG Love Story] is.”  Criterioncast

Headquartered in Chatsworth, California, Osiris Entertainment was created by Evan Crooke, a noted director with a mission to provide a distribution company that meets the business and creative requirements of the international film and music community and serves the global broadcast and DVD marketplace with the highest quality film entertainment in all popular genres. Osiris Entertainment boasts a large catalog of films which it distributes worldwide to top broadcasters, including NBC Universal, Netflix, RedBox, Starz, A&E Networks, Dish Network, Amazon, Ingram Entertainment, Warner, AT&T, Rogers, Verizon and Showtime. Osiris is also partnered with major retailers like Wal-Mart. Films distributed by Osiris comprise the top-billed Raspberry Magic (Bella Thorne), Listen to Your Heart (Cybill Shepherd), Clear Lake WI (Michael Madsen), along with award-winning releases including All God’s Creatures, Surviving Hitler: A Love Story, and Pretty Ugly People (Melissa McCarthy, Missy Pile), The Year Dolly Parton Was My Mom and Father vs. Son. As a filmmaker, Evan Crooke understands the very specific business needs of the filmmaking community as well as the appetite for quality film entertainment across global broadcast and DVD markets.