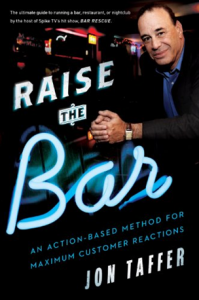 (MediaQuire) This October brings a 4th Season of SPIKE TV’s highest rated program “Bar Rescue,” (Sunday’s @ 9/8C) and a new book from Jon Taffer, the top-rated host known as the no-nonsense host of “Bar Rescue,” which gives failing nightlife establishments one last chance at success. Taffer is an internationally recognized, award-winning hospitality expert, highly respected management guru, author of the forthcoming ultimate guide to running a bar/restaurant/nightclub entitled RAISE THE BAR, and a esteemed tastemaker and go-to source for the newest trends in the food, beverage & nightlife industries. As host of “Bar Rescue,” he brings SPIKE TV to the top of the ratings rat race, besting shows in its time slot like the critically-acclaimed fan-favorite AMC’s “Mad Men.”

With nearly three decades of hands-on experience, this New York native is a two-time winner of the Bar Operator of the Year award, one of only six inductees into the Nightclub Hall of Fame and the only recipient of the Legendary Leadership Award in the history of the industry, among a myriad of other honors. Founder and Chairman of Taffer Dynamics, a world-renowned hospitality consulting and business services firm, Taffer concurrently serves as president of Nightclub and Bar Media Group, which operates the Nightclub & Bar Convention & Trade Show in Las Vegas.