by Alma Bond / Available on Amazon 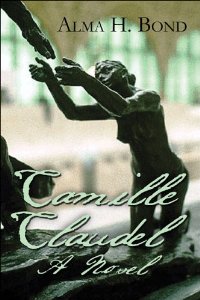 Camille Claudel, an old lady confined to the Asylum for the Insane in Montdevergues, France, reviews her life. She says, “I hope my memoir will illustrate the heights of passion Rodin and I reached, and unravel the mystery of why they were transformed into vinegar and ashes.” The tragedy is not only hers, she adds, but that of many female artists who found it impossible to achieve the success of men artists of lesser ability. The book illuminates her childhood and the rise of her career in the setting of her ecstatic life with Rodin. Their ten years of bliss are followed by the disintegration of her love for him, and its evolution into hatred and psychosis. The last third of the book describes the horrors of Claudel’s life in the asylum, ending with the highly original manner in which she comes to terms psychologically with Rodin and the other important figures in her life.

“He brought great joy to his Maman, and Camille loved him dearly. ” Sandra Heptinstall

“It may open some interesting college campus discussions and debates between art students and even historians. ” W. H. McDonald Jr.

“I found this to be a fascinating story, and although the memoirs have been fictionalized, the events from real history shine through. ”