CAN THE WORDS OF A PSYCHIC CHANGE YOUR CHOICES—AND YOUR FATE? 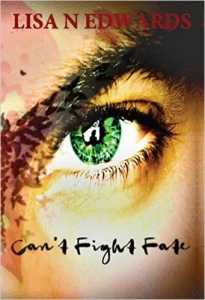 (MediaQuire) How much do we control our own destiny? In Lisa N. Edwards’ new book, Can’t Fight Fate, Nikki, a lively Australian girl, thought she had her life planned out—until a visit to a psychic flipped her world on its head. During her reading, the psychic describes Nikki’s soul mate, a Hollywood man with crystal green eyes. But then, she lays down a cryptic warning: “Remember, he’s nice to look at, nice to see, but if you chase him, he will flee…”

Flash forward 17 years later, and Nikki’s career as a Hollywood entertainment lawyer is just taking off. That’s when she crosses paths with her green-eyed soulmate. But will she heed the psychic’s warning, or does she ignore it to pursue what she wants?

Inspired by her own experiences with psychics, Edwards brings a fresh perspective to romance and finding your soul mate in a chaotic world.

“My goal has always been to entertain people, whether with film and TV, or now, through writing,” says Edwards. “This story has been inside of me for a long time, and the more I spoke to others about my experiences with psychics, the more I believed people would relate to my book. My own visit to a psychic gave me goals and aspirations, changed my direction, and ultimately, changed my life.”

In Can’t Fight Fate, Edwards uses beautiful prose to reveal:
• While every person’s life is filled with choices, their end destination will always remain the same
• The true power and legitimacy of psychics, their amazing impact on lives (including the author’s), and when they should be heeded
• How to navigate your way through a supposedly predestined life without losing hope

Lisa N. Edwards is a graduate of NIDA (National Institute of Dramatic Art) in Sydney, Australia, after which she was trained at The Film Space. She and her youngest daughter, Darcie, were featured in a series of Coles TV Commercials—‘Feed your Family for $10 with Curtis Stone’ and Coles Home Brand. Lisa’s latest credits include soon-to-be-released Aussie comedy ‘Now Add Honey’ and two Award-Winning Hollywood Short films, ‘Riviera’ and ‘The Road Less Traveled.’ A large portion of Lisa’s working life was spent as a Talent Agent with VisionsMCP in Melbourne, of which she was the owner and Company Director for 13 years. For more information, please visit http://www.lisanedwards.com.