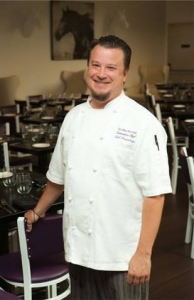 (VenusMuse) – Executive Chef Bill Rosenberg of Westchester’s NoMa Social wants to share two of their favorite festive dishes from their new fall menu with your readers. These recipes are the perfect addition to a Thanksgiving dinner or a new festive recipe to try during the fall season. NoMa (North of Manhattan) has already been widely reviewed as a go-to destination, worth the trip and easy to reach from anywhere in the New York region located just to the north of New York City, in Westchester NY.

Check out each video recipe below featuring Chef Bill Rosenberg:

Bill Rosenberg, Executive Chef of NoMa Social, located at One Radisson Plaza in New Rochelle, has earned critical praise throughout his 20-year career as executive chef for some of the New York metro area’s top restaurants. Prior to joining NoMa Social, he was executive chef/owner for more than 10 years of F.I.S.H., Port Chester, New York, which was rated by Zagat as one of America’s top seafood houses and named by Westchester Magazine as the “Best New
Restaurant.”

After graduating from the Culinary Institute of America in 1992 with a degree in culinary arts, Rosenberg launched his successful career. He held executive chef positions with Two Moons in Port Chester; Barcelona Wine Bar, SoNo, Connecticut and Vivo Restaurant and Dome Restaurant, both in Greenwich, Connecticut which were all rated highly by The New York Times.Rosenberg’s Mediterranean style was honed at F.I.S.H. where he created new and exciting dishes using ecologically sustainable seafood, produce and meats. At Barcelona Wine Bar and Vivo Restaurant, Spanish tapas was one of his specialties. The experiences set the stage for the full tapas bar that will be one of the NoMa Social’s offerings.

Passionate about food and the restaurant business, Rosenberg prides himself on his excellent knowledge about food and wine pairings, which diners will enjoy at NoMa Social. Chef Rosenberg will surely delight guests’ palates with his unique Mediterranean culinary creations.

For more information on Chef Bill Rosenberg or NoMa Social, please visit their website at www.NoMaSocial.com.  Find him on Facebook!