“My husband and I eloped after knowing each other for a little more than 4 months. We were young and blissfully happy. But days after getting married, I was suddenly so happy, so joyful, that I started to get a sinking feeling. What if he died?” – Taylor Jenkins Reid 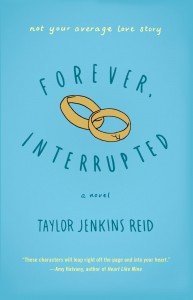 Reid shares how she got the idea for her story; “My husband and I eloped after knowing each other for a little more than 4 months. We were young and blissfully happy. It was a thrilling, breathtaking time.  But days after getting married, I was suddenly so happy, so joyful, that I started to get a sinking feeling.  What if he died?”

The main character in Forever, Interrupted is Elise, who Reid says, “I put her into the center of my nightmare. I gave her a love that consumed her and lifted her higher than she’d ever felt, and then I ripped it away from her the moment she finally held that happiness in her hand. I sent her deep into the pits of grief… In my doing so, Elsie became her own person with her own fears and needs — and I found that I could tell much more than a grief story. I could tell a story of love, of friendship, and of hope.”

Forever, Interrupted is a story about Elsie and Ben,average twenty-somethings, but this is not your average love story. It begins bright and promising: the newlywed couple is head over heels in love, having eloped six months after they met. But it all shatters in an instant; Ben out riding his bike, is hit by a truck—and dies on impact.

Elsie hears the sirens outside her apartment, but by the time she gets downstairs, his body has already been taken to the hospital. When she arrives, Elsie is greeted by an unexpected visitor—her mother-in-law, Susan, whom she has never met and who doesn’t even know she exists.

Both are seared with grief; Susan is still mourning the death of her own husband several years earlier, and the loss of her only son is almost too much to bear. The two women immediately sour on one another, fighting over what to do with Ben’s belongings and how to fulfill his wishes. But as time goes by, Susan and Elsie both realize that despite the terrible accident that brought them together, they are now the only family they have left.

Interweaving Elsie and Ben’s charmed romance with Elsie and Susan’s healing process, Forever, Interrupted will make you laugh, make you cry, and remind you that there’s more than one way to live happily ever after.

New York Times bestselling authors – Emma McLaughlin and Nicola Kraus – “Taylor Jenkins Reid has written a poignant and heartfelt exploration of love and commitment in the absence of shared time that asks, what does it take to be the love of someone’s life?”

Author of The Best of Us – Sarah Pekkanen – “Sweet, heartfelt, and surprising, Forever Interrupted is a story about a young woman struggling to find her way after losing her husband. These characters made me laugh as well as cry, and I ended up falling in love with them, too.” 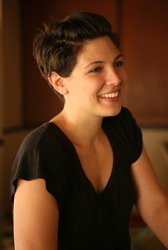 Taylor Jenkins Reid is an author and essayist living in Los Angeles. Before becoming a writer, she worked in entertainment and education. This is her first novel.  Follow her Twitter.