On Becoming a Grandparent

On Becoming a Grandparent: A Diary of Family Discovery 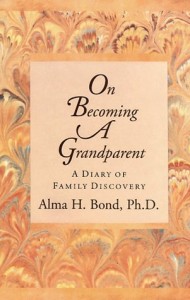 On Becoming A Grandparent is an engaging, practical guide to the reality of an important rite of passage.

The birth of a child can affect its family “as a baleful disease,” asserts Freudian psychoanalyst Bond ( Who Killed Virginia Woolf ), a mother and a grandmother. Here she writes in a diary format to confide last night’s dreams and today’s worries–that she will “lose” her daughter after the baby’s birth; that she fears competition from the child’s other, richer grandparents. Having closely followed (and described) the growth of her daughter Janet’s embryo, and fantasized about her first grandchild-to-be, Bond then realizes she’ll have to “mourn” before she will be able to love the real child, and dolefully reflects that the child–Rachel Alana–“brings her that much closer to death.” It’s refreshing to listen in on such candidly inparted mixed feelings.
Copyright 1994 Reed Business Information, Inc.
Visit my Amazon author page for a complete list of my books.   amazon.com/author/almabond

Relying on her own experience, Bond examines the impact an upcoming birth has on a family, especially the soon-to-be grandparents. Her diary explores all the family members’ relationships and the emotions and reactions she herself experienced as a prospective grandmother. Bond (Is There Life After Analysis?, LJ 6/15/93) brings to this work 38 years of experience as a psychoanalyst, and, given her training as a Freudian, sometimes tedious and superfluous dream interpretation plays a larger than needed role in her diary. That quibble aside, Bond’s analysis of what grandparents can expect with the birth of a child fills a definite need and will complement the many books available on the art of grandparenting, such as Lois Wyse’s Grandchildren Are So Much Fun I Should Have Had Them First (Crown, 1992).
Priscilla Davis, Cuyahoga Cty. P.L., South Euclid, Ohio
Copyright 1994 Reed Business Information, Inc.