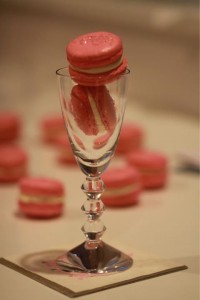 If you don’t own a copy of Pierre’s fabulous MACARONS cookbook, you should definitely purchase.  Gorgeous photos with detailed recipes including his own signature recipes.   And, you’ll need a quality digital scale.  I use Yamato DKS – affordably priced and works perfectly.

FOR THE MACARON SHELLS 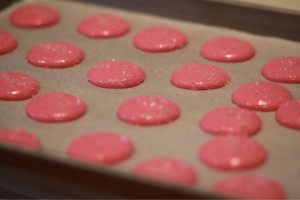 Bring the water and sugar to a boil at 245 F.  When the syrup reaches about 200 degrees F, start whisking the second portion of egg whites to soft peaks.  Once you reach the 245 degrees F start carefully pouring the hot syrup into the egg whites.  Whisk and allow the meringue to cool down, then fold into the almond sugar mixture. * Fold in the melted chocolate.

Spoon the batter into a piping bag fitted with a plain nozzle.  Pipe rounds of batter about 3.5 cm in diameter, spacing them 2 cm apart on baking trays lined with baking parchment.  Rap the trays on the surface to remove air.  Leave shells to stand for at least 30 minutes until they form a skin.

Photos and recipe courtesy of intuitive consultant and writer, Victoria lynn Weston. Victoria lynn Weston is an intuitive consultant, writer and documentary producer.  Her works have been broadcast on PBS, Wisdom Network, Canadian Television.  Her documentary;  “America’s Victoria, Remembering Victoria Woodhull,” chronicles the life of Victoria Woodhull, the 1st woman to run for US President in 1872 – was featured at the annual Montreal/Quebec International Film Festival – honoring 90th year women got the vote!   She is the founder and President of MediaQuire.