Based on the documentary “SOMM,” “Uncorked” Charts The Journey Of Six of New York’s Hottest Wine Stewards As They Attempt To Pass The Master Sommelier Test 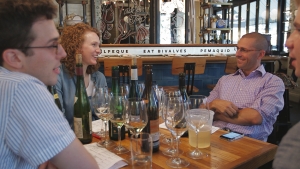 (MediaQuire) LOS ANGELES –  Master Sommelier is more than just a title; it’s a badge of honor – and to earn it you need to be a wine expert in mind, body, and spirit – an achievement measured by passing one of the world’s most grueling exams.  Only 230 people across the globe have passed the test in its 40 + year history, but this accomplishment allows a person entry into one of the world’s most exclusive clubs, where membership can lead to some of the most desirable jobs in the food and wine industry.  Produced by Left/Right productions, and based on the fascinating documentary “Somm,” this one-hour, six-part docu-series will chronicle six aspiring Master Sommeliers preparing for, and finally attempting to pass, this ultimate test.  Journey into one of the few worlds where drinking counts as studying, when UNCORKED premieres Tuesday, November 10 at 10/9c only on Esquire Network.

To pass the Master Sommelier test, one must have an extensive knowledge of wine theory, the skills to perfectly present and serve wine to the most discerning palates, and from taste alone – the ability to determine  the year, grape variety and region of a wine (down to the exact, tiny village where the grapes were grown). Earning the elusive title takes personal sacrifice, confidence, a comprehensive knowledge of every wine from around the world, and… a really thick skin. They’ll face harsh criticism from the Masters at every turn, but if they can endure and perform well in the finals, they just might realize their dream. The Sommeliers must pass all three parts (theory, service and blind tasting) in three years or they will have to start from square one.

“Wine is loved by people all over the world, but only a handful can say they’ve actually “mastered” it,” said Matt Hanna, head of original programming, Esquire Network.  “We’re excited to take viewers inside this highly-competitive world and showcase the stories of these young wine experts as they sacrifice everything to tackle a test that has defeated thousands of candidates since it started 40 years ago.”

Attending tasting events around the world – from Sonoma to Spain – each hour-long episode of UNCORKED, will feature the Sommeliers swirling, smelling and “slurping” a multitude of wines.  They also enter competitions overseen by Master Sommeliers including: Geoff Kruth, MS (President, Guildsomm.com), Andy McNamara, MS (Chairman, Court of Master Sommeliers), Fred Dame, MS (Founder, American Chapter of the Court of Masters) and Laura Maniec, MS (Co-Founder, Corkbuzz Restaurant & Wine Bar in New York and North Carolina). Impressing these Masters Sommeliers along the way will gain the candidates a huge advantage, as they strive to achieve their ultimate goal.  In the final episode, the six Sommeliers finally face the exam they have been working towards for years, in the hopes of becoming a Master Sommelier.

Meet the Somms of UNCORKED:

Jack Mason: Born and raised in College Station, Texas, Jack began working in local restaurants at a young age. Midway through his university studies, and while fulfilling a wine education requirement, Jack’s oenophilia interest was sparked and he decided to continue his education with a degree in Hospitality Management at the Cornell School of Hotel Administration.  In 2014, Jack joined the opening team of Marta as Wine Director, where he enjoys focusing on wines of Southern Italy and Champagne to complement Chef Nick Anderer’s Roman-influenced menu, and furthering the team’s beverage education. Since opening Marta, he has been named one of Zagat’s and Forbes’ “30 under 30,” and Wine & Spirits, “Best New Sommeliers” of 2015. This will be Jack’s third time taking the exam.

Yannick Benjamin: A visit to Bordeaux at age 13 inspired Yannick to get involved with wine, and he is now a Sommelier at New York’s University Club and lead lecturer for Saturday seminars at Le Du’s Wines in the West Village. In October 2003, a car accident left Yannick paralyzed from the waist down, but that did not deter him from pursuing his passion.  He quickly adapted, outfitting his wheelchair with a table that allows him to continue to perform the tasks of a Sommelier. Yannick’s passion is his non-profit organization Wheeling Forward  where he is the co-founder and director of development. Yannick is on his final attempt to pass the test.

Jane Lopes: Jane graduated from the University of Chicago with a love for food, wine, and spirits, and thus began her career in Chicago and then Nashville. Lopes moved to New York in January of 2013 where she worked at Maialino and Ristorante Morini before landing at Eleven Madison Park in October of 2014. During her tenure in New York, Jane passed her Advanced Exam through the Court of Master Sommeliers, receiving the second highest score, was named Wine & Spirits “Best New Sommelier” 2014, and won the Chaîne des Rôtisseurs Jeune Somm Nationals 2014. Jane is taking the examination for the first time.

Dana Gaiser: Currently Key Accounts Director for Lauber Imports, Dana first developed a taste for wine in his teens with his parents when they started exploring and buying fine wines. By 18, he was selecting wines for their cellar and developing a palate for his first loves: Burgundy, German Riesling, and Champagne. After a four-year diversion studying Mechanical Engineering at Stanford, he accepted a position as an Assistant Sommelier in 2001, and his passion for wine became a profession. He has since served as a Sommelier and Beverage Director at prestigious restaurants on both coasts. Dana is on his third attempt on the exam.

Josh Nadel: Josh Nadel is a native New Yorker and the Executive Beverage Director of Andrew Carmellini’s restaurants in New York City: The Dutch, Locanda Verde, Bar Primi, Little Park, Joe’s Public Theatre, and Lafayette. He is a certified Advanced Sommelier by the Court of Master Sommeliers and co-founder of Gothic Wine Gothic Wine, a boutique winery in the Willamette Valley, Oregon.  Previously, he was a Sommelier at the venerable wine-destination restaurants, Veritas and Cru in New York City. This will be Josh’s fourth time in taking the test.

Morgan Harris: While attending college, Morgan was first exposed to wine — and the energy of the service industry — while working part-time at a 300-seat white-tablecloth Italian restaurant in Boston. Currently, Morgan works as a Sommelier at the Michelin-starred Aureole restaurant in New York’s Times Square. He hopes to spend his career promoting wine as one of the planet’s finest agricultural products and a humanizing force for social good. Morgan is taking the exam for the second time.