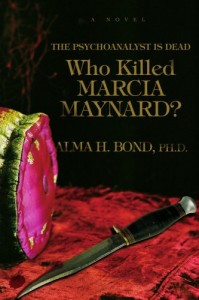 Dr. Marcia Maynard, famous child psychoanalyst and infant researcher, was murdered in her bed at the El Dorado Apartment House in Manhattan by an unknown killer. Psychoanalyst Mary Wells helps solve the mystery with her astute analytical and psychological skills. In conjunction with her lover Detective John Franklin, they are an almost unstoppable team.

Dr. Wells and Lt. Franklin are devastated to hear that his “Auntie Marcie” and Well’s colleague and former analyst has been murdered. The pair, who are both in mourning for Maynard, need all their wits about them as they question her colleagues, staff, and friends.

Finding someone angry enough to kill Maynard was not difficult, as many people had been mistreated by the doctor. The suspects included her beautiful Indian housekeeper, Asha Rupashi, whom Maynard continually abused and who was a beneficiary in Maynard’s will, her chief associate for 30 years, Dr. James Whirter, a man her colleagues said she treated “like a lapdog,” Rogerio Chavez, a Chinese restaurant delivery man, whom Maynard had insulted and infuriated, and several suitors whom she had rejected. The book ends with the killer opening up under ingenious psychological questioning by Dr. Wells, who then falls into Lt. Franklin’s arms.