Who Killed Virginia Woolf? a Psychobiography 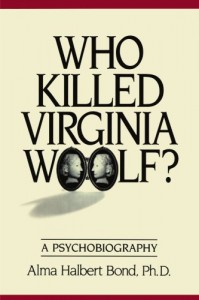 Who, if anyone, was responsible when Virginia Woolf wandered across the water-meadows and threw herself in the river Ouse? By examining the various strains which led to Woolf’s tragically ending her life the true nature of her marriage, her complex relationship with Vita Sackville-West, the pangs of sexual insecurity, and the lack of self-esteem noted psychoanalyst Alma H. Bond illustrates how these influences coalesced to bring Woolf’s life to a logical ending. a masterpiece of its kinda brilliant, original book that not only gives the reader new understanding of why Virginia Woolf committed suicide but also brings him new depths in the understanding of his own life. A flowing, emphatic style of writing that keeps you turning the page to learn more of the torment in Woolfs life from infancy on that drove her to kill herself.